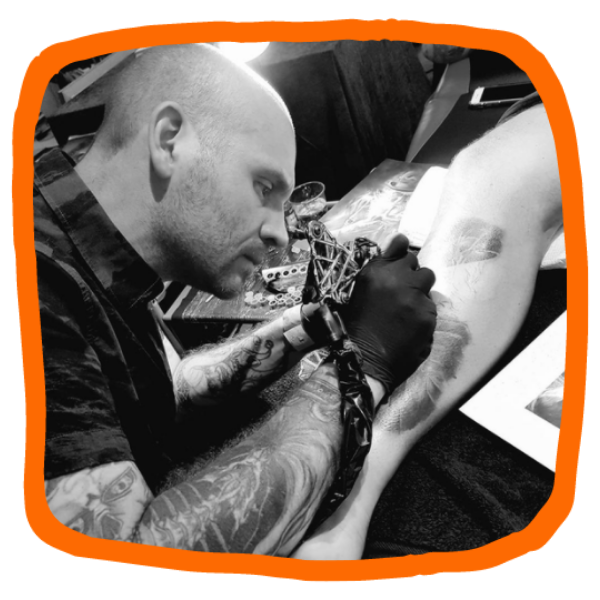 Paul first arrived on the tattoo scene as a young apprentice at aged 20.

After a car accident de-railed his plans to finish his bachelor science degree in product design at University, he needed a new direction.

With two A-levels in both Fine Art and Graphics and a B-Tech qualification in 3D design under his belt, it was clear that he was destined to thrive in a creative role.

His tattoo apprenticeship saw him working extremely long days, for very little money, but his passion for the art carried him through and it was only 6 months until he was up to the standard he needed to run alone.

A bold, ambitious move for such a young artist.

By 22, he had bagged his first tattoo award. This instilled a drive in him that ran alongside his talent, to test himself, to push the boundaries, to see what others don’t, to go above and beyond, for the perfect piece of art, every time.

In the years that followed, he went from strength to strength, trophy after trophy filled his cabinet, but he never got lost in the success. Humble to the core, to this day he is still his own biggest critic. Still striving for perfection, still creating beautiful custom-made designs tailored to not only the character of the client, but the shapes and contours of their body.

Although an incredible artist across the board, Pauls particular area of strength is in his high detailed realism and over the past few years his signature colour splash style has become increasingly popular.

Whatever you can imagine, Paul will make it come to life.

Paul relocated Naughty Needles in 2017 and continues his success from his exclusive appointment-only studio in Harwood, Bolton.